How to Do Outstanding Writing on a Blog — Mostly Blogging

Do you ever answer questions at Quora? If not, I recommend it. You get to read questions about your blogging niche, points of confusion that you thought were crystal clear. When I answered questions about blogging, these were some of the questions I was asked: How do I write for a blog? What is the…

via How to Do Outstanding Writing on a Blog — Mostly Blogging

Today, I got a new freelance job. For myself. It’s on a trial basis, for nine weeks. At the end of July, I’ll have a performance evaluation and see if I was up to par.

No. I haven’t gone crazy. (Although some days I wonder.)

I’m posting about this experimental hiring of myself for accountability. I’ll update occasionally throughout this testing period.

My checkbook prompted this new regimen. Or, should I say the diminishing numbers in the checkbook. I’ve been a full time freelancer for a little over a year now. I’ve made it through this far. Barely. But, between royalty checks being far less than I’d like, and a few assignments falling through, it seems that each month gets just a bit further behind. I didn’t have the money for a new tire last month. I’ve realized that it’s been a year since I made a trip to see my grandkids that are growing up far too quickly. And, I’m looking ahead and wondering how I’ll get to California in November for my mom’s eightieth birthday.

Looking at the financial aspects jockeying for attention, I decided to apply at local libraries for a part time summer position. I applied for four positions. All were from fourteen to nineteen hours a week. It would cut into my writing time, but the supplemental paychecks would add a few (very few) figures on my bank balance.

Except…the positions begin next week…and no one has even called me for an interview.

I should have been perfect for them. I’ve worked in a library before. I’m a mother and grandmother – I know about dealing with children. And…I’m a writer.

Evidently they didn’t think I was as good of a fit as I thought I was.

When I stopped into the dollar store last week for some laundry soap, I noticed a ‘Help Wanted’ poster in the window. I debated about filling out an application, hoping for a ten to twelve hours a week job. At home I pulled up their website and was checking out the employee benefits page before I got a reality check.

If I add in a half hour drive each way, probably twice a week, now I’m looking at twelve hours invested to get three hundred dollars. Surely, I thought, if I productively queried for twelve hours a week I could generate at least that much, if not far more.

I’m talking working for that whole time. Not blogging. Not connecting on social media. Not researching. Not adding to a novel that’s still far from complete. Not outlining a new book that tempts me from the netherlands.

Twelve hours a week of queries. Or, writing on said anticipated assignments.

I decided to run a trial period. Nine weeks. The period the library jobs would have run. I made myself a time card. I’m going to log in and out. I’m going to track my time. I’m committing to an aggressive twelve hours a week.

I looked back at the past four months. Three queries one month. Nine another. Four another. No wonder the acceptances aren’t rolling in. Three and four queries a month is pitiful. Did the 30 Days/30 Queries class I took from Mridu Khullar Relph last year not sink in? Did I learn nothing?

If I’m going to thrive in this career and make some good money, not muddling through at just over broke, then I’d better buckle down and treat it with the same respect and hard work that I’d give any other employer.

So I’m hiring myself and will track my progress, much as I’d have to prove to a boss that I’d accomplished the tasks they set forth for me.

Now I’m motivated. There’s nothing like a little challenge to bring out the contestant qualities lurking under my skin. I’ve got something to prove. I’m out to prove that investing the time in myself and my own career will be better financially than any other punch-the-timeclock job.

Prose from the Pros, Writer's Zen

Especially for Writers — Walk On 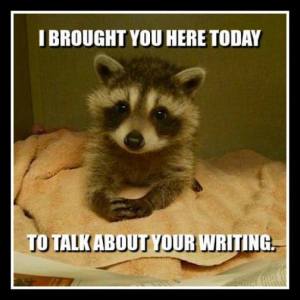 via Especially for Writers — Walk On

Writing from a Different Gender Perspective

Writing from a Different Gender Perspective

I have to admit it, my easiest characters are women, usually in the thirty to fifty year age range. Writing POV from a male perspective? That becomes difficult. (And they usually end up being too close to my ex for comfort.)

I was excited to see this post, Gender Bending: Writing a Different Gender Than Your Own, by Janice Hardy. She has some excellent advice about writing rich, dimensional characters of the other gender. Here’s two of her tips. Go check out Jane Hardy’s Fiction University for the full article.

Focus on the character, not the gender.

If you try to “write a woman who…” you might get stuck trying to be “a woman.” But write about “a character who…” and you’ll find yourself thinking more about what that character will do and how they’ll act in ways that fit the story and the situation. They’re a person first, a gender second.
Remember no two people are alike, regardless of gender.

“Men are like X” or “women always Y” don’t apply. My husband breaks all kinds of those rules, and I’m not your typical gal. Avoid the stereotypes and even have fun with them a little. Have men that love shoes, women who are rabid for sports. Let your men (or women) be as different from each other as they are from the opposite sex. A group of men won’t all have the same feelings about things, same as a group of anything won’t have the same feelings.

How is it for you? Can you write from the opposite gender’s perspective?

Prose from the Pros, Writer's Zen

Photo Credit: Fotolia You’re typing on Google, searching away. The bright blue text is set vibrant against that white, mute background. That blue text is a headline. It’s a topic. It’s the thing, in bold letters, that attracts readers. A few words can entice thousands to click, resulting in high traffic to your blog post…

Last week I wrote about The Five Minute Miracle, a short meditation I was going to try to see if it helped open up my imagination.

The You Tube video I’d found, the Five Minute Miracle, was a short guided meditation that focused on imagination. Nicola asked for feedback to see how it went.

I was going to try using this meditation before writing for a week, although a few days I jumped right into work and forgot to start with the meditation. I only did this particular meditation four times before sitting down to write.

It seemed that it helped. But, I also wondered if it truly helped, or if my awareness of it made it seem like it did. You know how your friend gets a new, silver Volkswagen bug…and suddenly, that’s all you see are VW bugs on the road?

I think I’ll need to work with this one more to see if there are any noticeable differences.

Here’s a few affirmations for a writer’s imagination:

Blogging Tips- Readership Tips — The Richness of a Simple Life

In this post I’m going to share a few tips that can improve the experience for readers or increase your followers. These are just tips and my personal recommendation, no need to implement them just wanted you to consider them if you haven’t already.

via Blogging Tips- Readership Tips — The Richness of a Simple Life